Television theme songs are quintessential representations of nostalgia. People of all ages, backgrounds and walks of life can point to melodies that define their childhoods, their development as teenagers, their newfound independence after high school or their maturation into adulthood. For many, TV theme songs bring them back to better days gone by.

What follows is certainly not an exhaustive list of TV theme songs (and is presented in no particular order), but each of these embody a certain time period, invoke a certain feeling, or simply refuse to cease repeating in viewers' heads.

As one of television's longest running series, the theme song for Law & Order seems an obvious choice for this list. Regardless of the show's longevity, the punchy electric guitar riffs of the theme song coupled with the head-jarring scene change cue - affectionately referred to as 'The Clang' by composer Mike Post - are enough to justify its presence among the ranks of TV's most memorable (and the dogs agree). The song's foreboding nature effectively introduces the drama portrayed in this show about the justice system charged with ridding one of the world's largest cities of crime.

One would be hard pressed to find a more unique theme song than that of the 1990's sitcom Seinfeld. Widely heralded as one of the best television series of all time, Seinfeld's quirky, sometimes inexplicable plot lines are flawlessly mirrored by Jonathan Wolff's eccentric composition of synthesized bass guitar and 'mouth percussion.'

3. The Dukes Of Hazzard

When a TV theme song reaches number one on a Billboard magazine chart, its fate as an all-time most memorable theme is sealed. This is exactly what happened in 1980 when Good Ol' Boys - sung by country music legend Waylon Jennings - reached number one on Billboard's Hot Country Singles chart. Moreover, the song brings back great memories of the General Lee flying down a dirt road.

The theme from Rawhide is especially exemplary, with its train track chugging rhythm and reverberating harmonies so characteristic of early country-western music. Plus, the show starred Clint Eastwood. What more memorable Western theme song could there be?

Any child of the 1990s - or fan of TGIF, in general - will agree, Friday nights simply were not complete without spending a half hour with the Tanner family and the fondly remembered Full House theme song. Performed by Jesse Frederick (and co-written by Frederick, Bennett Salvay and show creator Jeff Franklin), Everywhere You Look never failed to put an uplifting exclamation point on the end of a long school week, all the while rendering images of the Golden Gate Bridge and sunny San Francisco.

David Crane's and Marta Kauffman's original pitch for their hit sitcom states, "It's about friendship because when you're single and in the city, your friends are your family." What better choice could there have been for a theme song than I'll Be There For You by The Rembrandts? Although the original tune was simply the 45-second theme song, The Rembrandts' record label forced the band to re-record it as a single citing the demand created when Nashville DJs Charlie Quinn and Tom Peace looped the theme and played it on the air. It's safe to say that the demand for the tune still exists.

Without a doubt one of the most recognizable and memorable TV theme songs, Movin' On Up joyfully recounts the story of the Jefferson family and their climb up the social ladder. In a sense, the song has transcended the realm of TV theme songs and become a sort of rallying cry for Americans wishing to improve their socio-economic situation. The song is included on AARP's list of Top 10 TV Songs. 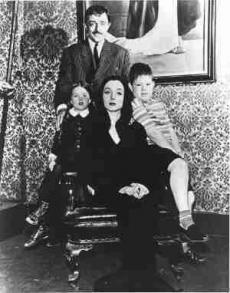 Cast of The Addams Family

Who can hear the first four notes of The Addams Family theme and not snap their fingers to the beat? It's included in TV Guide's list of the best TV themes of all time.

Composed by Earl Hagen and Herbert Spencer (with lyrics by Everett Sloane), The Fishin' Hole is a tune that effortlessly takes the listener to a simpler time in a small town, where bumbling deputies get away with ineptitude and an afternoon by a pond is all anyone can ask for. It also cracks the top ten of Paste Magazine's list of the 40 best television themes of all times.

The Fonz in Happy Days

Although not the original theme song for the show (that honor goes to Bill Haley's Rock Around The Clock), Happy Days has become engrained in the hearts of Americans as a perfect representation of the post-war, baby-booming 1950s. As proof of the show's - and the theme's - place in American History, go check out the Smithsonian's National Museum of American History. There resides the Happy Days record dropped in the juke box during the show's opening credits. It also landed a spot on the TV Guide list all-time best television themes.

The theme of Cheers, Where Everybody Knows Your Name is widely considered the best television theme song of all time, earning spots on the previously mentioned TV Guide and Paste Magazine lists, as well as Songfacts.com - and rightly so. It perfectly sets the tone for the TV series and it speaks the truth - sometimes you do have to go where everybody knows your name. It's simply a great song with one of the best sing-a-long choruses ever composed.

While the television landscape has drastically changed over the past decade, music has continued to play a pivotal role in show introductions. Series like The Wire and Weeds have given the audience theme songs reworked in various styles for each season. Simultaneously, shows like Mad Men and The Walking Dead have delivered instrumental theme music more concerned with setting a mood than telling a story. Both directions are introducing memorable themes that are sure to burrow their way into the hearts and minds of fans in the years ahead.