Scales, chords, and intervals form the basis of music. Learning intervals and scales is essential to developing musical skills, and is an important part in the study of any musical instrument.

Order of Sharps and Flats

Flats lower a note by a half step. They are added to both major and minor key signatures in the following order:

There are several types of musical scales. The most basic scales are chromatic, major, and minor scales in each key signature.

Half Steps and Whole Steps

Scales are made up of half steps and whole steps. You can best visualize the difference between a half step and a whole step by picturing a piano keyboard. On the keyboard, you will notice there are black keys and white keys.

Whole steps, also known as whole tones, are basic notes. Half steps or half tones are sharps and flats.

The table below shows examples.

Major scales have the same notes on the way up (ascending) as they have on the way down (descending). The table below shows examples of ascending major scales.

There are three types of minor scales: natural, harmonic, and melodic. Minor scales are similar to major scales, but the third step is lowered a half step.

Note that the melodic minor is different on the way down than the way up. Examples are shown in the table below.

An interval is the distance between the root of a major scale (the note it starts on) and another note on the scale.

For example, in the C major scale, intervals are as follows:

For example, in the C scale, minor intervals are as follows:

For example, in the C scale, augmented intervals are as follows:

A diminished interval has one half step less between the root and the corresponding note in a perfect interval. Perfect and minor intervals can be diminished.

Below are examples of diminished intervals in the C scale.

To help you study the concepts contained in this scales and intervals lesson, download and print this practice worksheet. The worksheet us made up of questions based on the lesson, and the answers are included with the download, but on a separate page. To print: 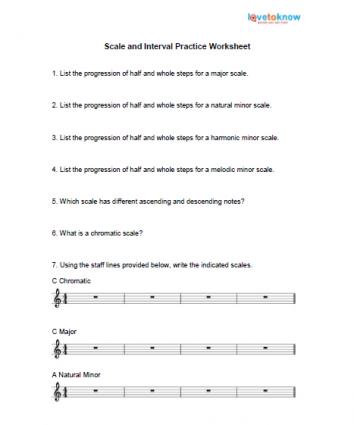 A Foundation for Music