Jazz patterns are omnipresent in today's popular music. From the repetitious bass lines and figures in R&B, to the chord progressions in gospel, soul and holiday tunes, to the blues riffs in funk and hip hop, to the extended improvised solos of rock "jam" bands, echoes of this great American music are everywhere.

The Feel Is the Thing

The main element of jazz that differs from other genres of music is the rhythm. Jazz swings. So for practice with the following ten jazz patterns, consider using a metronome once the music is under your fingers and gently emphasize the music on the second and fourth beats - known as the 2 and 4 - of each measure. For help with the following music refer to the easy-to-use guide to adobe printables. 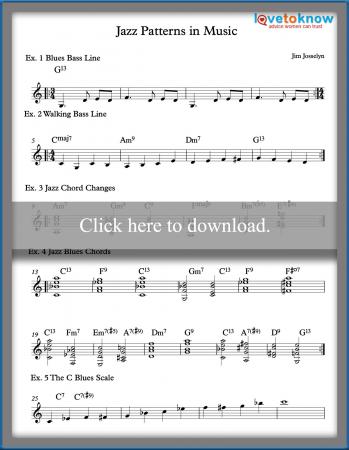 Examples One and Two - Bass

The walking bass line is literally the heart of jazz swing. Example one is a segment of a common bass figure like the one on the Miles Davis standard All Blues. Three-quarter or three-four time has its own lilt and feel so listen to the original if you are unfamiliar. Example two shows a common jazz "turnaround," a chord progression that usually is at the end of a song, and a sample walking bass line.

The advanced harmony in jazz is another unique element to the music with chord tones like sevens, nines, thirteens, and more coloring the chords. Example three is a common chord progression that's similar to Bobby Hebb's classic Sunny and/or Freddie Hubbard's Red Clay. Example four is a blues chord progression the way a modern jazz player would approach it.

Jazz solos come from many sources, but the main one is scales. Two of the most prominent scales used in jazz are the blues scale and the melodic minor scale. For fun with scales, learn them, play them in different keys, make patterns on them and improvise with them. Once you start doing that, you're on your way to playing some jazz.

When improvisors work on scales and start to come up with ideas, they create patterns also knowns as riffs, licks, or lines. Example seven is a four bar blues phrase with repetition and rhythm. Remember, it's the blues so play it with conviction. Examples eight and nine are exactly the same save for one note and as such, the pattern works on C minor and C major.

Since rhythm is so crucial in jazz example ten illustrates two very common ones. The Charleston is a jazz dance that started in Charleston, South Carolina. This simple beat is the underlying groove in many jazz tunes. The jazz "riff" in 10b works quite well in styles from big band swing, to soul jazz, to modern jazz.

Or so jazz has been called. The masters of this music created an art form and a musical legacy that is paralleled only by the great classical maestros. From its origins in New Orleans to the global reach of the music in today's world, jazz has been a proud good will ambassador from and for the United States. The music presented here is a solid start to understanding some of this deep languages fundamentals.