The powerful effects that music has on the human mind has been the subject of numerous scientific studies. For thousands of years, religious leaders have overseen congregations in the singing of hymns, military commanders have marched their soldiers to the rhythm of beating drums, and oppressed cultures have created spirituals in order to cope with their sorrow. It's fascinating to look at how music has affected humans in the past, but it's awe inspiring to think of how it can be utilized in the future.

This Is Your Brain on Music

It's almost second nature to turn on the radio when riding in your car or to blast your favorite album when knocking out your to-do list. What most don't realize, though, is that music has the ability to affect our moods, our physical health, our psychological health, and even how our brains function.

The Effect of Music on Mood

This ability of music to affect mood is often exploited. For instance, advertisers will play exciting music to coax people into excitement about their products. Moreover, some companies are creating products that use algorithms to create playlists aimed at inducing various emotions. Stereomood and Moodagent are two examples.

The Rhythm of the Human Body

The groundbreaking research of Sheila Woodward has shown that, as babies in the womb, humans can hear the rhythmic pulse of blood flowing through the mother's veins. "Nature allows us to evolve with rhythm all around us," according to Woodward. It's no wonder that rhythm and tempo play such an important physiological role for humans. For instance:

Rhythm can likewise be a unifying force. Scientists, such as Aniruddh Patel at the Neurosciences Institute in San Diego, California, theorize that humans originally developed the ability to create and move to a rhythm as a way to bond people together in groups. According to Patel, people who move together to a beat are more likely to cooperate with each other, even in nonmusical tasks.

The Effect of Music on Brain Function

The human brain is an incredible piece of biological machinery. Music is perceived by humans, and the brain is able to turn this perception into reality. Music can fundamentally alter how the brain works. 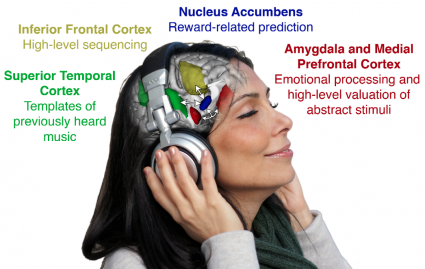 Numerous studies have shown that early musical training in children does wonders for their brain development. One such study, published by Plos One, shows that people who had extensive musical training as children performed better than those who didn't in:

Julie Roy, a graduate student in speech pathology and audiology at the University of Montreal, presented a study at Neuroscience 2013 (.pdf) showing that musical training may affect multi-sensory processing in humans. Her test results show that musicians and non-musicians are equally capable of detecting information based on a single sense, but musicians are more capable of separating auditory and tactile information.

Another study, performed by Yunxin Wang from the State Key Laboratory of Cognitive Neuroscience and Learning at Beijing Normal University in China, provides evidence that childhood musical training can even change the structure of the brain's cortex.

Music has the ability to move us. It can induce feelings, moods, even states of mind. Due to this sort of power, along with the physiological effects described above, music has fascinating capabilities when it comes to mental and physical therapy.

A recent analysis of various studies, performed by Mona Lisa Chanda and Daniel Levitin, zoned in specifically on one in which researchers studied patients set to undergo surgery. Participants in the study either listened to music or took anti-anxiety drugs during the lead-up to surgery time.

There is also evidence, as presented by Susan Seligson, that music can enable Alzheimer's patients to remember more effectively or even thwart dementia. Those struggling with Alzheimer's and other dementias may be unable to understand or respond to language, but music can help them to regain their cognitive focus. Familiar music may even allow them to enjoy memories long ago lost due to their disease.

Moreover, people with motor disorders such as Parkinson's Disease have been observed to walk better while listening to rhythmic music with a prevalent beat. Oliver Sacks, in his piece The Power of Music, discusses tests that have shown that patients are able to synchronize their movements to such a beat.

Music stimulates more parts of the brain than any other human function. Regions of the brain dedicated to movement, attention, planning and memory are all activated by music, which quite literally penetrates the human body. Given these facts, one can conclude that music has drastic and lasting effects on humans.