For a great time, it's hard to beat a fun-filled music festival. Music festivals are an excellent way to gain exposure to new and exciting artists, as well as tried and true acts. Many music festivals in the United States and abroad sport a substantial price tag, but those that are free guarantee a wonderful time for attendees without breaking the bank.

There are quite a number of well-attended free festivals across the United States, whether in large cities or in smaller towns. Regardless of the location or the venue, they all have one thing in common: great entertainment.

Produced by the Village Voice, the family-friendly 4Knots Music Festival has been an enthusiastically attended annual event at New York's South Street Seaport since 2011. It's held for one day in July each year, throughout the afternoon and evening. The Seaport, a historical region of Manhattan, features architecture from the mid-1800s that brings to mind the area's rich seafaring past.

Fans of indie rock music flock to the 4Knots Music Festival to see such acts as Protomartyr, a hard-edged indie rock band, and the Strumbellas, a Juno Award-winning folk band, both of which played in 2016. The indie bands that populate the festival range from rap to punk to bluegrass. Artists who have played at 4Knots in past years include Guided By Voices, a funky punk act, and Car Seat Headrest, an indie rock band with a brainy, introspective feel.

Hardly Strictly Bluegrass, held in Golden Gate Park in San Francisco, California, is a three-day free festival that's been held every year since 2001, usually in late September or early October. More than 100 music acts gather on seven different stages to entertain attendees. The festival is family-friendly, and people are allowed to bring coolers, chairs, and blankets to make themselves comfortable during the festivities.

In its earliest years, Hardly Strictly Bluegrass was centered around bluegrass artists. As the festival grew in popularity, it started to add other genres, like country and folk. Artists in 2016 included Boz Scaggs, Patty Griffin, and Kris Kristofferson. Regular performers at the festival in years past include Emmylou Harris, Steve Earle, and Nick Lowe.

No matter what music genres you like, chances are excellent you'll find them featured at Musikfest, a music festival that's been held in August every year since 1984 in Bethlehem, Pennsylvania. Over the thirty years since its beginnings, Musikfest has morphed into a ten-day extravaganza that showcases 500 music acts on fourteen stages, drawing 900,000 people. Musikfest is held by ArtsQuest, a non-profit organization for the arts.

All performances at Musikfest are free except for those that take place on the Sands Steel Stage. The music offerings at the festival span every conceivable genre, and past performers have included major acts like Jethro Tull, Lynyrd Skynyrd, George Thorogood, Alison Krauss and Union Station, Carrie Underwood, Joe Cocker, and Alice in Chains. In addition to music, you can also enjoy watching dance and laughing at comedy routines.

The Chicago Blues Festival got its start in 1984 and features top-notch blues musicians, both celebrated greats and new blues acts. Presented for three days in early June each year, the free festival features an annual theme, usually based on the life and work of a famous blues musician. Over the years, the Chicago Blues Festival, with 500,000 attendees, has grown into the largest of the city's music festivals.

If you love blues, this is a festival you simply mustn't miss. Past performers have included blues luminaries like John Lee Hooker, Bo Diddley, B.B. King, and Bonnie Raitt. Other acclaimed artists to sing the blues at the festival are Shamekia Copeland, Fred Wesley, and Corky Siegel. On the Southwest Blues Porch, you can even talk to the artists about their lives and their work. Chicago is a major blues heartland, and the Chicago Blues Festival celebrates the blues as a living, breathing tradition and a continuing source of great pride. 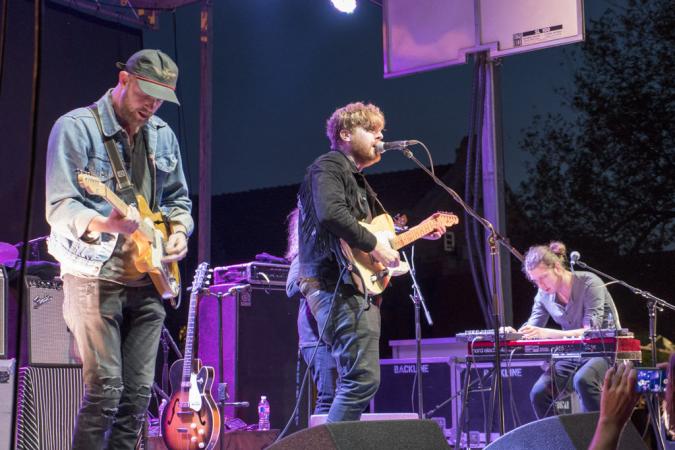 The Norman Music Festival started out as a one-day event in 2008, but it has grown into a major three-day April gala that draws 80,000 people and features multiple music genres that range from indie rock to punk, and even slam poetry. Held in downtown Norman, Oklahoma, the festivities are free to the public and feature 200 acts performing on 20 live stages, both indoors and outdoors.

Recent headliner acts for the Norman Music Festival include Tallows, an alternative rock band, Cloud Nothings, an indie rock band, and Nikki Lane, a country singer. Other headliner acts from past years are Ra Ra Riot, an electronic band, and Lee Baines III and the Glory Fires, a rock band. If you like shopping for unique crafts, then the Norman Music Festival is definitely for you. Craftspeople and artisans sell all kinds of handmade wares, including distinctive jewelry and accents for your home.

The French Quarter Festival touts itself as the largest free festival in the South. Taking place in the French Quarter, the oldest district in New Orleans, Louisiana, the festival has been going strong each year since 1984 for four days in April and boasts an attendance of over 760,000 people. It features 23 stages on which 1,700 artists present a veritable smorgasbord of New Orleans-flavored musical genres both old and new, including jazz, rhythm and blues, Latin music, brass bands, zydeco, and cabaret.

Performers at the French Quarter Festival include Buckwheat Zydeco, Delfeayo Marsalis and the Uptown Jazz Orchestra, Irma Thomas, the Soul Queen of New Orleans, and the New Orleans Nightcrawlers. If you're a connoisseur of New Orleans, you'll not only love the music, but you'll also love the food. Over 60 booths offer all kinds of delectable eats, from jambalaya to crawfish étouffée, at affordable prices.

Comfest, or Community Festival, has taken place in Columbus, Ohio, every June since 1972. It's a three-day music festival with a social justice emphasis, and it bills itself as the Party with a Purpose. The free event started out as a hippie street party near Ohio State University. In the years since 1972, it has grown in attendance to over 70,000 people and is now held at Goodale Park, but it continues to emphasize progressive ideals and community-building.

With its hippie spirit, Comfest hearkens back to Woodstock in 1969, but its music spans a wide range of genres, including indie rock, bluegrass, reggae, and tunes that are wonderful not only for listening but also for dancing. Comfest performers include the garage rock band Garbage Geek, singer-songwriter and acoustic guitarist Donna Mogavero, and funky hip-hop artist Satele. Comfest focuses primarily on local talent, but it has had famous headliners in the past, such as Michelle Shocked and Black 47.

The Richmond Folk Festival, held in Richmond, Virginia, has been going strong for twelve years. It draws 200,000 people to take part in its celebration of traditional folk music, as well as its delicious ethnic and regional food offerings. The three-day festival is held in October, and over 30 music and dance acts perform on seven live stages. There's an exhibit where attendees can learn more about folk life, as well as an area featuring activities especially for children.

At the Richmond Folk Festival, the focus is on folk music of all kinds, including bluegrass, gospel, Appalachian music and ballads, blues, and old-time mountain music. There's also plenty of folk music from other countries on tap, such as Balinese gamelan orchestra, Brazilian mamulengo, Bulgarian kaba gaida, and Southern Italian pizzica tarantata. Performers at the festival include Irish fiddlers Paddy Keenan and Jimmy Noonan, the Cajun band BeauSoleil Trio, and rockabilly singer Jason D. Williams.

Well-known, free festivals can be found around the globe. The popularity of these festivals has proved to be enduring, since they've been recurring events for many years.

Danube Island, in Vienna, Austria, hosts the three-day Danube Island Festival every year in June, usually in the middle or the latter part of the month. Known as Donauinselfest in German, the event got its start in 1984 and in the years since, it has grown into a gigantic, open-air, free festival that brings in nearly three million people.

The music at Donauinselfest runs the gamut of genres, including hard rock, hip hop, and techno. One of the biggest draws is Russkaja, an Austrian band that mixes rock, polka, and ska into their own musical hybrid. Other headliner acts are Frittenbude, a German rock band, and Samy Deluxe, a rapper who hails from Hamburg.

The Parkpop Music Festival, which takes place in The Hague, Netherlands, has been a yearly event since 1981. The first time it was held, it drew 35,000 people. Currently, the single-day festivities are held the last Sunday of June each year, and attendance tops out at around 200,000 people. Parkpop is billed as the biggest free pop music festival in the Netherlands.

An impressive number of pop stars have played at Parkpop throughout the years, such as the Bangles, Robbie Williams, Marillion, and Sinead O'Connor. In 2015, one of the headliner bands was Orchestral Manoeuvres in the Dark, and other big-name acts that year were Midnight Oil and the Untouchables.

BBC Radio 1's Big Weekend Festival features big names in music as well as up-and-coming artists across numerous genres. The festival, which draws 50,000 visitors, is held in a different location in the United Kingdom every year in late May. Though the festival is free, you'll need to get a ticket if you want to attend, so act quickly because they go fast.

A Great Time for Free

Music festivals are often quite pricey, but when you find fabulous, no-charge events to attend, you can have the best of both worlds: great entertainment for a price that can't be beat. So the next time you're in the mood for a music festival, find a free one near you, and then sit back, relax, and soak up the music.