Country music history has had plenty of significant events, interesting anecdotes, surprising factoids, and great music. Trivia buffs and country fans will enjoy this collection of trivia questions that features 36 questions and answers, divided into three skill levels. The answers follow the list of questions, so don't scroll down too far if you're trying to test yourself without seeing them! These questions and the answer key can be printed out to use anywhere. If you need help downloading the printables, check out these helpful tips. 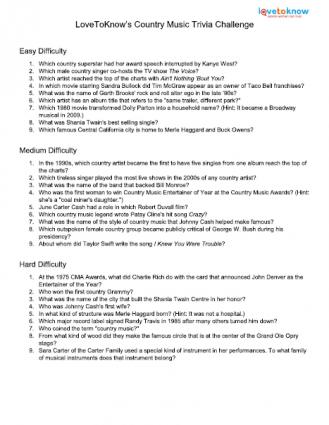 As a warm up, the following easy questions will help you break the ice and make even the casual fan feel like a country music expert:

Now that your trivia chops are warmed up, it's time to crank it up a notch. These nine questions will begin to separate the real gurus from the more casual country fans:

If you thought the last nine questions were difficult, try these on for size. Only the best country music experts will ace them all: 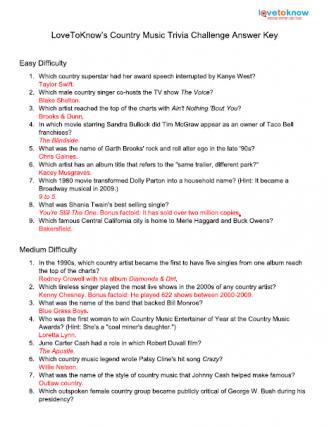 Perfect for the Next CMA Award Show

These trivia questions are a great way to break the ice and have a little fun at a CMA Award viewing party or a fun get together with friends. And, in case you found yourself arguing with the answer key, the links above provide the factual background for each answer as well as some bonus information about each topic.