In the decades before the internet, the concept of royalty free music was not widely known. Now that the digital age has placed millions of audio tracks within grasp of anyone with a computer or phone, the term has become common. Content creators of the world, whether recording artists or filmmakers, scour the internet for easy tracks to download to use in their productions.

The definition of this type of music is straightforward: it's music you can use without paying royalties to the creator. It is most often instrumental music designed to function as backing tracks for other mediums such as video or podcasts.

Of course, it also helps to know the definition of the term royalty. In the context of music, a royalty is the payment made to the owner of a song's copyright whenever and wherever that song is played in public. For example, this is why the person who wrote the song Frosty The Snowman is likely very rich. Every holiday season, whenever the song is played, the copyright owner receives royalty payments for each public airing.

While the definition might be simple, there are quite a few misunderstandings and wrong assumptions associated with the term. To better understand what this type of music is, it's important to keep the following principles in mind:

One more myth needs busting. Some believe it is fair game to use a piece of the music without paying or seeking permission if you only use 30 seconds. As noted in a number of legal decisions, there is no time limit set because there are many copyrighted compositions whose total length is less than 30 seconds (such as a quick commercial jingle).

Copyrights on Compositions Versus Recordings

As noted by entertainment lawyers and the federal government, there is actually more than one copyright in play when you're dealing with a song, whether royalty free or not. Any recorded composition has two separate elements of copyright:

You might be asking: what's this have to do with music that's royalty free?

In theory, it's possible a sound recording is granted to you as free from royalties, while the composition is not, in which case you would have to pay royalties to the composer. When you're dealing with most merchants offering music that's royalty free, this half-and-half royalty free predicament is rare. It is theoretically possible, however, and that distinction in copyright law is important to understand.

The process is fairly straight-forward (in theory) because it is a simple economic exchange: the copyright owners of a song will grant you the freedom to use their music free of royalties as long as you satisfy any initial requirements, such as paying a flat onetime fee for the song or registering as a member of their site and paying the subscription fee.

It's also possible a copyright owner could offer their music not only as royalty free, but as free in all other ways too, giving you access to their music without asking for a onetime fee or a subscription commitment to their business or website.

Essentially, what you are required to do to use the music is entirely up to the copyright owners.

With all that in mind, the following sites are quality locations for finding music that's royalty free, and they offer a variety of music and royalty free agreements.

The slogan of Safe Music List perfectly sums up music without royalties: "Buy once, use forever." They have a large selection of moods and styles including the following:

They offer three royalty free licenses ranging from about $20 to about $200, which is their most expensive license and allows unlimited use in all commercial contexts. 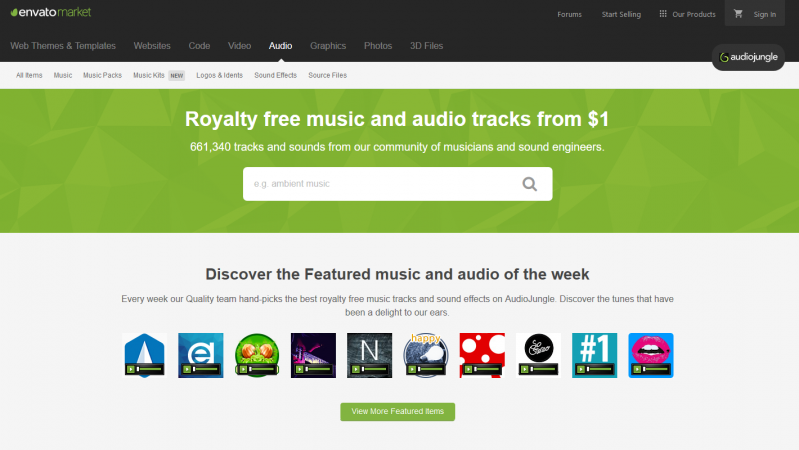 Audio Jungle, which is the music component of a larger content merchant site called Envato Market, sells over 600,000 tracks. What makes this site slightly different is it is user generated content created by the site's "community of musicians and sound engineers." The site offers more tracks than many other sites, but the quality might be slightly less consistent. Just be sure to listen carefully to each track before purchasing. License prices range from about $20 to about $300.

There are content creators who offer their music for free use without needing to purchase a license. Purple Planet, for example, allows you to use their music free of charge in limited circumstances and as long as you attribute them in your production that uses the music. If you want to use their music in broader, more public commercial ways, they offer low cost licenses ranging from about $5 to $40.

They have a nice variety of musical styles as well, including the following:

Be careful to examine their license page carefully before using any of their free music in your productions.

If everything is done properly, the creation and use of music free from royalties is a fantastic share economy. It allows talented musicians and composers to create content that other artists need for their productions, and both parties profit from the exchange in different ways. It also allows composers and performers who aren't necessarily famous or signing big record label contracts to still make money.