Perhaps more than any other rock star in history, Bono has taken the worlds of rock music and humanitarian activism by storm. Depending on who you talk to, he is an epic inspiration or an annoyance. Regardless, it's impossible to have an objective portrait of the man without first looking at the forces that have shaped him.

Bono was born Paul David Hewson on May 10, 1960, in Dublin, Ireland. Although the Irish Troubles surged in earnest during his early years, the Hewson household did not reflect the religious feud. His parents had agreed that their first born child, Bono's older brother Norman, would be raised in the Irish Anglican church with their mother, and that their second child would be raised a Catholic like their father. In the end, however, Bono drifted towards attending church with his mother and brother.

However, when Bono was 14, tragedy struck. His mother died suddenly of a brain aneurysm while attending her own father's funeral. This loss became a formative force that would shape his creative work. Many of U2's songs would reflect this. In their album Pop, for example, Bono sings mournfully: "Mother, you left and made me someone / Now I'm still a child, but no one tells me no."

Another pivotal event in Bono's life was his conversion to charismatic Christianity during his high school years, an event that also included Larry Mullen, Jr. and The Edge. They each nurtured a fiery commitment to a stripped-down, passionate, almost "punk rock" belief in the teachings of Christ. Adam Clayton did not share in this experience, and this became a source of tension in the early years, but the band mates were able to reconcile those differences and maintain strong friendships.

Bono's loyalty to friends and loved ones has set him apart from other rock stars: 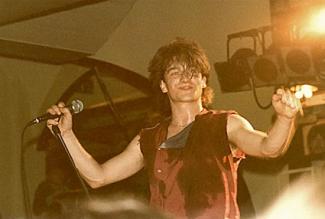 The early eighties showed promise for U2 as their first four full-length studio albums and tours were successful. However, it was their fifth full-length studio album that struck gold. Bono's talent as a charismatic front man became world-famous with their breakthrough album The Joshua Tree in 1987, which peaked at number one in the US and landed U2 on Time Magazine's cover as "Rock's Hottest Ticket." This would just be the beginning of U2's rise to legendary fame. 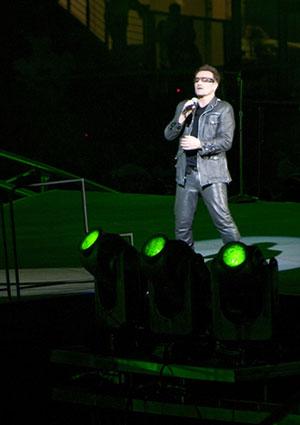 Although the follow-up album to The Joshua Tree, called Rattle and Hum, was less successful, the disappointment pushed U2 to hide away in Berlin in the early nineties, just as the Berlin Wall was falling, and re-invent themselves. The result was one of U2's greatest achievements, the album Achtung Baby. It has received a great deal of praise:

This was also the album where Bono began his performance art and created a fictional persona for both the album and the tour: an exaggerated rock star character known as The Fly. This satirizing alter-ego began Bono's famous habit of wearing sunglasses at all public appearances, although it also became a matter of necessity because his eyes are very sensitive to light.

For the rest of the nineties, U2 struggled to match the critical and commercial success of Achtung Baby. As the 2000s arrived, however, they hit it big again with All That You Can't Leave Behind and How to Dismantle an Atomic Bomb, which together have sold over seven million copies. Although their third album of the 2000s, No Line On The Horizon, was not as successful as the previous two, its 360 Tour became the highest grossing tour of all time. Other achievements include:

Bono's enduring persona and showmanship fill U2's years of success with a distinct personality. Whatever critics or fans say about him, it is difficult to deny his durability, both figuratively and literally.

U2 has always used their music to explore political and humanitarian issues, from the Bloody Sunday massacre, racism in America and a host of other issues. Later in his career Bono also embraced active involvement: 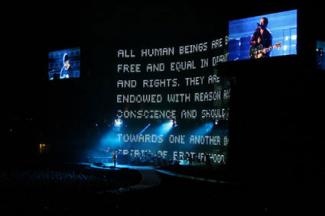 U2 Concert in Amsterdam Arena, Netherlands 2005

In addition to these efforts, he has championed the causes of political prisoners and activists in countries like Myanmar and Iran.

Bono's advocacy for foreign aid in Africa came to a screeching halt after meeting Professor George Ayittey, a prominent Ghanaian economist. In a speech in Ghana, Dr. Ayittey derided foreign aid and offered a different solution: entrepreneurial capitalism. He knew Bono was in attendance, and he took the opportunity to "rip into the foreign aid establishment" that Bono had championed.

Although at first disagreeing with Dr. Ayittey, Bono would read his book Africa Unchained: the Blueprint for Africa's Future and later change his mind. At a recent speech to Georgetown University, Bono said, "Aid is just a stopgap. Commerce [and] entrepreneurial capitalism take more people out of poverty than aid. We need Africa to become an economic powerhouse." 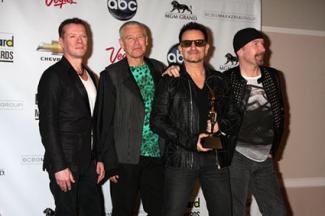 U2 - Larry Mullen Jr, Adam Clayton, Bono and The Edge

Bono has come under fire on more than one occasion in his career:

Despite the criticism it is undeniable that Bono is one of the most powerful musicians and public figures alive today. In the song Moment of Surrender from the 2009 album No Line On the Horizon, Bono sings the line "vision over visibility." This lyric summarizes Bono's life perfectly. He has pursued grand visions instead of settling for the easy visibility of the status quo.