The Tupac Shakur biography tells the story of a promising artist who died too soon. He lived a life full of huge success in music and films, but behind the scenes, his personal life was chaotic and often dangerous. His murder has never been solved, but persistent rumors suggest that both Death Row Records and the Los Angeles police department know more about the crime than they will say. Despite the tragic end to his life, Tupac (whose name is also spelled 2Pac) remains one of the music industry's most beloved figures.

Tupac was born June 16, 1971, in Harlem, New York to Afeni Shakur, just one month after she was acquitted on over 150 charges associated with her involvement with a militant arm of the Black Panthers. In the months following his birth, Afeni changed Tupac's name several times in an attempt to protect him from some of her enemies. Eventually, she settled on Tupac Shakur, giving him the last name of Mutulu Shakur, who she married when Tupac was one year old.

Tupac joined Harlem's 127th Street Ensemble when he was 12 years old and began acting in local productions, but a few years later, the family moved to Baltimore (without Mutulu, who was in prison for his involvement in a Brinks truck robbery). After two years in public high school, Tupac transferred to Baltimore's famed School of the Arts, where he befriended a young Jada Pinkett Smith. Their friendship would last until his death. His teachers from this time speak of him as being immensely talented in acting, writing and music.

In 1988, Tupac moved again - this time to Marin City, California. His teacher there arranged a music performance for him, where he met an agent who got him a job as a roadie working for rap group Digital Underground.

Through his work with Digital Underground, Tupac landed a record deal with Interscope and released his first album 2Pacalypse Now. Although his album wasn't a chart success, it was critically acclaimed. His second release, 1993's Strictly 4 My N.I.G.G.A.Z, put him on the map. It spawned the hits I Get Around and Keep Ya Head Up.

In 1994, he released Thug Life, a collaboration with a short lived rap group he formed of the same name.

Me Against the World came next in 1995. This album went multi-platinum. He followed with All Eyez on Me. It was a huge success - nine times platinum - but the real story was what was behind the scene in Tupac's life during this time. A series of legal troubles, a shooting, and a deal with Death Row Records started a slide that ultimately ended in his death.

In 1993, Tupac was accused of sexually assaulting a woman in a hotel room. Tupac denied the charges, and it was rumored that the woman who accused him was involved in a well known criminal figure who had an agenda against Tupac (and who was also involved in the Mike Tyson rape case).

In 1994, the day before his sentencing, Tupac was shot five times in a New York recording studio lobby, while Biggie and his entourage were recording upstairs. Tupac survived the incident, but was suspicious that NY rap figures had known in advance about the shooting. At his rescheduled sentencing, Tupac was sentenced to a one and half year prison term.

Suge Knight, head of Death Row Records, reached out to Tupac while he was in prison. Knight pulled strings and posted a large bond to get Tupac released from prison early, on the understanding he would sign a multi-album deal. Knight was involved in an East Coast-West Coast feud with Bad Boy Records, and a paranoid Tupac soon became a central part of that battle. 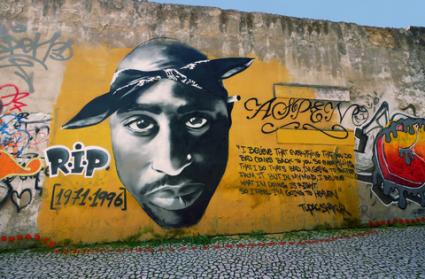 By September 1996, rumors of a rift between Tupac and Knight had begun to surface. On September 7, 1996, Tupac attended a boxing match in Las Vegas with Knight and a few other Death Row associates. Tupac was caught on tape fighting with another man in the casino, rumored to be a gang rival of Knight. After leaving the match, Tupac was the passenger in a car driven by Knight when a gunman approached the car and fired several times. Tupac died a few days after being in a coma. Knight claimed to have been shot as well, but it later emerged he was only grazed by a bullet.

Knight pointed the finger towards Bad Boy Records and Biggie, but evidence showed that they were nowhere near the scene. In 1997, Biggie was murdered in a similar matter outside of an awards show in California.

Both murders remain unsolved, although there has been a great deal of press coverage given to threats Knight made against Tupac and Biggie, Knight's involvement in gang activity, and members of the LA Police Department who were moonlighting as Death Row Records body guards. For a good look at the story behind the murders of these two artists, see the documentary Biggie and Tupac.

After his death, his mother battled with Knight for the rights to Tupac's music and has since released volumes and volumes of his unreleased tracks.