If modern civilization could be summed up in one word, that word would be options. In the Information Age, the sheer variety of choices available to the average person grows exponentially each year. This has never been truer in the world of digital music downloads. The following are some top-notch sites for downloading music, and all offer a variety of perks for consumers.

Pay-per-track sites, such as iTunes and Amazon, price their songs the same. On average, the music costs $.99-1.29 per song or $9.99-12.99 per album depending on its length, with the occasional deal where a song or album is on sale. The question for these sites becomes less about price and more about the browsing, purchasing, and listening experience of each service. 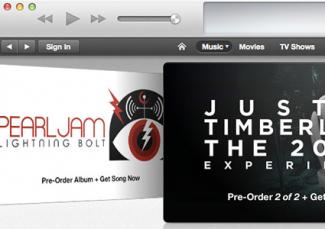 This household name has become the Coca-Cola of pay-for-music websites. Technically, iTunes is the name of Mac's music player. The actual name of their site that sells music is iTunes store, which has a built-in presence in iTunes. The reason for their success, and the reason why it is such a great product, is because of its ground-up integration with everything Apple.

To buy music in the iTunes store, you must either own a Mac or, if you own a PC, you must download the iTunes software onto your computer, in addition to signing up for a free Apple account. 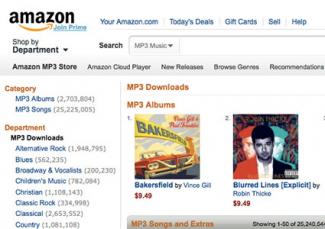 Another household name, Amazon has a special section of their massive site devoted to selling mp3s. It does not have the iTunes advantage of instant integration into the Apple gadgets that almost everyone uses, but its accessibility and prices are better than the iTunes store.

The service requires that you have an Amazon account, which is free to create, and you must download a small software program before you can use their mp3s. Other than that, Amazon is a great alternative for those who do not own a Mac, do not feel like downloading iTunes onto their PC, or simply dislike the iTunes design. 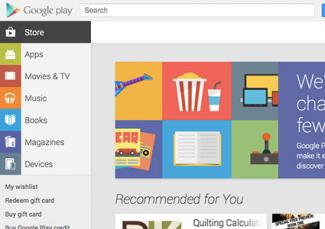 The new Google Play's aggressive invasion of Android devices has given iTunes and Amazon a run for their money. As iTunes is the flagship music platform for all Apple devices, Google Play has become the default player for all Android devices.

For those who want broader access to music downloads without pay-per-track fees, the following sites provide convenient plans for true music junkies. Each site offers its own unique take on the business model, ranging from true indie purists to all-you-can-eat commercial smorgasbords: 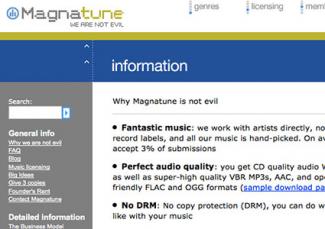 If you wish to avoid the corporate vibe of major record labels and commercial radio and want to, as they say, "stick it to the Man," Magnatune should be your one and only home online for music. If Wil Wheaton is in love with it, then you know it's a great find.

Their licensing numbers provide a glimpse into their dominance of the indie market. The site has sold 4,000 licenses for films to use music from their artists -- 7,000 general licenses in 12 years. Licensing is a reliable measurement of the influence of independent music download sites, as most indie bands do not have significant sales numbers in the mainstream market.

While Spotify is essentially a streaming music service, it does offer its premium users offline downloads, which qualifies it as a great downloading service for music connoisseurs. Spotify is the joker to Magnatune's batman. It loves giant record labels, well-dressed entertainment lawyers, and superstar artists. It offers a Discover Weekly playlist that is created based on your music preferences. It also allows you to be alert of artists new albums and customize playlists, as well as share music on Facebook, Twitter, and via email. It popularity is reflected in its numbers with a 33 percent increase subscribers in 2016, according to the CEO Daniel Ek.

While Spotify does offer unlimited streaming, its downloads are limited. However, you can get thousands a month on up to three devices. If you're looking for a specific number, you can download 9,999 a month, that's 3,333 per device from its massive music library for a flat monthly fee of $9.99 a month.

In regards to the corporate vs. indie debate, if Magnatune is on one end and Spotify is on the other, eMusic is somewhere in the middle. Although they are devoted primarily to independent artists, it does not have the direct pay-to-artist that Magnatune features. It does, however, contain a carefully curated lineup of indie artists and most notably maintains a well-written editorial section that steers listeners to the best and brightest independent artists. This gives the site a very hip feel, as if it were an authority on what is cool and what is not. For this reason, the site achieved an impressive #5 slot in a recent Top 10 ranking of the best music websites of 2017 from No1Reviews.com ranking higher than Amazon MP3. This is an achievement considering that eMusic, a store the dabbles mostly in indie music, was pitted against commercial heavyweights like iTunes and Pandora. However, because of its highly curated indie library, the pricing is higher than Spotify. It starts at $13.99 per month, which allows 28 downloads each month.

Before you set out on your journey to download everything from emo music to Hindi songs, consult a music file guide to better understand digital music file formats. Most sites, if not all, will only sell mp3s, the industry standard for online music sales. However, it doesn't hurt to know your way around digital music formats in case a seller offers a variety of choices for consumers who want higher quality audio than mp3.

Bring on the Competition

Every year brings the announcement of some new music download start-up that hopes to give iTunes a knock in the teeth and everyone else a run for their money. This can only be a good thing. The only challenge is keeping up with it all. Take time to peruse the high-quality sites mentioned above and enjoy the benefits of being a music fan in a highly competitive environment.