You have to love The Hives biography. This is a band that has combined catchy music, highly stylized looks and more than a little bit tongue and cheek good humor to win the listeners over. The whole package was good enough to get indie label impresario Alan McGee to take a chance on them, and it also earned them a lot of chart success.

The Hives Biography - The Early Years

The Hives may have only risen to prominence around the world in recent years, but the band is older than you may think. This Fagersta, Sweden band formed in 1993 and were signed fairly early on to Swedish label Sidekick records. They released an EP, Oh, Lord! When? How? in 1995 and the success of that release in Sweden saw the band graduate to Burning Heart Records, the parent label of Sidekick.

On Burning Heart, the band released Barely Legal, their first full length in 1997, and followed that up with another EP, A.K.A. I.D.I.O.T. in 1998. The Hives at this point were playing straightforward punk music, but they took a few years off after the last EP to write some new music and emerged with a slightly different sound.

As Luck Would Have It

Their return to the music scene in 2000 with their new sound was a lucky one - that new sound they came back with, heavily influenced by garage rock, happened to be just the sound that was in fashion at the moment. Bands like The Strokes and The White Stripes (all of the so called "the" bands at the time, as a matter of fact) were selling tons of records. The Hives' next album, Veni Vidi Vicious sat nicely alongside the new "latest thing" in music at the moment, and momentum began to pick up behind the band.

Luck entered the picture another time at this point in The Hives biography. Alan McGee, formerly of the lauded indie label Creation Records and the man who discovered Oasis, was looking for a big act to sign to his new Poptones imprint. He was in Germany and happened to catch a video by The Hives, for the song Hate to Say I Told You So. McGee tracked down the band and signed them up to Poptones.

The thumbs up from Alan McGee can take you a long way in the music press, and major music magazines began pounding the drum for the band. McGee released Your New Favorite Band on Poptones in 2001. The album was a compilation of material from their previous Swedish only releases. It was a chart success in the UK and cemented The Hives' place as a major act. 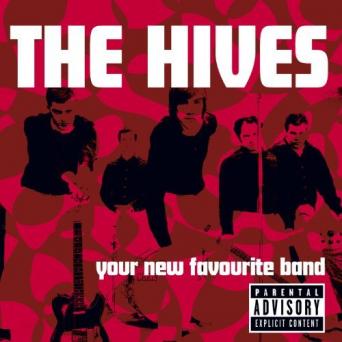 The Hives - Your New Favourite Band

Of course, when a band on an indie label begins selling like the big boys, it doesn't take long for the major labels to come sniffing around. Universal Music Group signed The Hives to a deal after the success of Your New Favorite Band. The deal didn't violate the agreement the band had with Poptones, but Burning Hearts Records cried foul. Burning Hearts claimed that they had first refusal on one more Hives album. The dispute was eventually settled - no big surprise - with a rumored $12 million deal from Universal on the table.

The Hives first major label release, Tyrannosaurus Hives, was released in 2004. It did less well than Your New Favorite Band, but it still sold very well. The band spent the next few years touring and writing new material, and returned in late 2007 with The Black and White album.

One unknown entity in The Hive biography is the strange case of Randy Fitzsimmons. Fitzsimmons gets all of the songwriting credits on The Hives' albums, and the band refers to him as the "sixth Hive," both muse and manager. Just who is this mystery man? Rumors have circulated that he is simply a creation of the band's imagination, while the band insists he is very much a real person. Is there a Randy Fitzsimmons out there pulling the strings for The Hives? You decide.