From Beyoncé who rose from her Destiny's Child roots to be So Crazy In Love, to Christina Aguilera who went from being a Genie in a Bottle to Dirrrty, female pop artists have helped define the everyday music scene. While it might be easy to name a few of your favorite female pop singers, it may be even more difficult to choose your favorite tracks from each artist.

Known almost as much for her sense of fashion and tumultuous love life as she is for her music, Rihanna left her homeland of Barbados when she was just 16 to come to the U.S. and pursue her dream of becoming a singer.

Hits like Unfaithful and Umbrella catapulted the singer to world fame, and follow-up releases like Only Girl (In the World) and We Found Love proved she has staying power. Her many awards include three Grammys and five People's Choice awards as of 2011.

British singer Adele sky-rocketed to true international fame with the release of her CD, 21. Hits like Rumour Has It, Rolling in the Deep, and Set Fire to the Rain capture the heartache of an earlier romance gone wrong. Her soulful voice conveys a weary wisdom that ought to be well beyond the comprehension of a woman of just 23, her age at the time the CD was released.

Even if she never recorded another track, this work alone would make her a legend. She earned a total of six Grammys for 21. 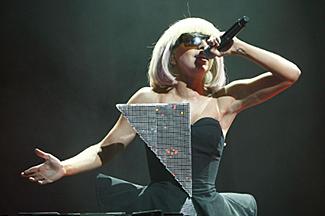 Absolutely outrageous with her fashion choices and musical productions, but with plenty of talent to back it up, Lady Gaga took the world by storm with her 2008 CD, The Fame. The CD sold over 15 million copies and produced the mega hits Just Dance, Pokerface, Paparazzi, and LoveGame.

"Mama Monster's" success continued with further releases like Bad Romance and Born This Way, but the singer also branched out to set up a philanthropic foundation called Born This Way, which focuses on youth empowerment and related issues. Constantly reinventing herself and born to take chances, it will be interesting to watch as her career continues to evolve.

Katy Perry fearlessly introduced herself to the world in 2008 with the refrain from her first hit, I Kissed a Girl. Since then, the world has been watching to see what this eccentric artist will come up with next. She's had a solid string of hits, including Waking Up in Vegas, California Gurls, Teenage Dream, and The One That Got Away.

Perry released a documentary in 2012, Part of Me in 3D. It's part bio of her early days and current life, as well as part concert footage. 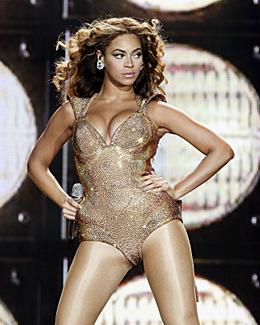 Beyoncé first gained recognition as part of Destiny's Child, but she shot to super stardom with a solo career that includes hits such as, Dangerously in Love, Irreplaceable, If I Were a Boy, and the iconic Single Ladies.

Musical stardom isn't enough for this talented woman. She also has a fashion line and a growing career as an actress.

Mariah Carey has had a long and rich career, including some peaks and valleys along the way. Her 1990 debut album, Mariah Carey, spawned memorable hits including Vision of Love and I Don't Wanna Cry.

Since that first chart buster, Mariah has become the top-selling female artist of all time, and she has managed to rack up 18 number one singles on the Billboard charts. She has also received numerous career awards for her music, as well as her humanitarian efforts.

Stacy Ann Ferguson, better known simply as Fergie, is a very busy singer who is part of the Black Eyed Peas as well as a solo artist in her own right. Her hits with the Peas include My Humps and I Gotta Feeling. Her top singles as a solo artist include Fergalicious, Glamorous, and Big Girls Don't Cry.

Fergie also acts. She has done voice roles on The Cleveland Show and appeared in feature films including Marmaduke and Nine.

Taylor Swift has become extremely popular for her heartfelt lyrics and girl-next-door vibe. Tracks released by this country/pop princess include Love Story, You Belong with Me, and We Are Never Ever Getting Back Together. She has also had successful collaborations with Boys Like Girls for Two Is Better Than One and John Mayer for Half of My Heart.

P!nk is one of the most successful female pop singers of her generation. She's been turning out the hits since 2001, beginning with her first single There You Go. Her second album propelled her to super stardom with the hits Don't Let Me Get Me and Get the Party Started. More recent hits like Who Knew, Sober, and Raise Your Glass prove that P!nk isn't going to run out of steam anytime soon. 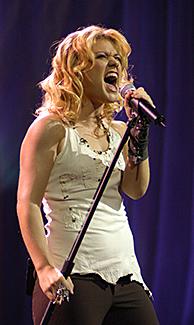 The hit American Idol singing competition got a strong start in its first season with winner Kelly Clarkson. Clarkson's performance of A Moment Like This was released as her first single before her first album Thankful. The singer went on to chart with singles like Miss Independent, Since You've Been Gone, Behind These Hazel Eyes, and My Life Would Suck Without You.

Clarkson wasn't the only starlet produced from American Idol winners. Carrie Underwood, the country-pop crossover winner of the fourth season, released Some Hearts, which went seven-times platinum. Singles released by the singer include Inside Your Heaven, Before He Cheats, Cowboy Casanova, and Temporary Home.

Ke$ha is the reigning queen of electro pop music. Her quirky yet catchy tunes and avant garde stage costumes delight her fans, and her end goal is to produce music that's fun to listen to. She has had a string of hits that include Tik Tok, Your Love Is My Drug, Take It Off, and Blah Blah Blah.

Miley Cyrus enjoyed a lot of success in the early stages of her career. She achieved super stardom with her TV show Hannah Montana, and produced a string of pop hits that include 7 Things and Fly on the Wall.

Now that her Hannah Montana days are behind her, Miley has been focusing on her adult career. Her single The Climb was a country-flavored tune that crossed over into the pop music chart to become a huge hit. Party in the U.S.A was a pure pop tune that was as playful as it was catchy. Can't Be Tamed was a 2010 electro-pop song unlike anything the singer had recorded before, and audiences finally had to accept the fact that little Miley was now a very grown up woman.

Kylie Minogue is one of Australia's most enduring pop stars. She charted in 1987 with her rendition of Locomotion, and the video received regular play on MTV. Other hits followed over the years, even if Minogue had difficulty making headway in the U.S. Confide in Me, Spinning Around and Can't Get You Out of My Head are just a few of Kylie's other top singles, and Can't Get You Out... is widely considered the singer's best single to date.

Once a mouseketeer on the 1990s cast of the Mickey Mouse Club, Britney Spears went on to release Hit Me Baby One More Time, the ambitious first single that launched her into the pop circuit. From there, the singer released numerous songs and albums, including Womanizer, Toxic, Oops! I Did It Again, and Stronger, to name but a few. 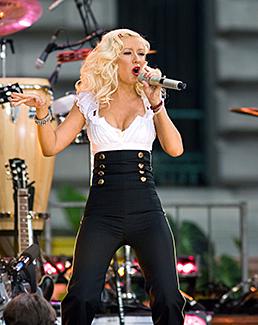 Christina Aguilera is another former mouseketeer who went on to release her first single, Genie in A Bottle, which shifted her career into high gear. The singer has released numerous hits like Candyman, What A Girl Wants, Beautiful, and I Turn To You. She also performed in the Disney film Mulan as the singing voice of the title character on the track Reflections.

Jennifer Lopez, affectionately known as J. Lo, is a triple threat - she sings, dances and acts. Her first album scored two big hits, If You Had My Love, and Waiting for Tonight. Jennifer continued to record over the years, and racked up more hits, including Love Don't Cost a Thing, and All I Have. Some of the star's biggest success has come from dance tracks, including I'm Into You and On the Floor.

Originally from Trinidad, Nicki Minaj made her world debut in 2010 with her CD Pink Friday. A blend of pop, R&B, rap, and hip hop, the CD went platinum and contained several hit singles, including Your Love, Check It Out, Right Thru Me, and Moment4Life.

Aside from the strength of her music, Nicki is also noted for her bizarre fashion sense and outrageous performances. Her live performance of Roman Holiday on the 2012 Grammy Awards generally shocked viewers, and although it received mixed reviews, the notoriety only seems to have boosted the singer's career since she was invited to become a judge on season 12 of American Idol.

Give Them a Listen

A list can only tell you so much. To understand what really makes each of these artists so popular, you need to listen to her music. You're undoubtedly familiar with at least a few of the singers on this list, so try exploring a few of the artists you know less about. You just might stumble across one that becomes a new favorite. These women are just a small sampling of many female pop artists that have helped shape today's pop music scene.