Lady Gaga is one of the most commercially successful and innovative artists of a generation. She approaches her music as performance art and has struck a balance that pleases popular music fans and critics alike.

Lady Gaga - real name Stefani Joanne Angelina Germanotta - was born March 28, 1986 in New York, New York. Her music talent was obvious from an early age. By four years old, she was able to play songs on the piano by ear. She wrote her first song at age 13 and started playing on the New York City open mic circuit the following year.

She was accepted into Juilliard to study music, but her parents opted to send her to a Catholic school, Convent of the Sacred Heart. By age 17, she gained early admission to the Tisch School of the Arts at New York University. Though she excelled in her studies there, she left school early so she could focus on music.

At age 19, Lady Gaga was signed to Def Jam Records. The deal terminated before any music was released, and the story behind the record deal remains unclear. Def Jam president L.A. Reid claimed to have heard Lady Gaga singing from an office down the hall from his own and to have signed her on the spot. According to Lady Gaga, she never met L.A. Reid.

After the Def Jam deal fell through, Lady Gaga got a job writing songs at Interscope Records and began to play shows in the Lower East Side of Manhattan. She became deeply involved in that scene and eventually started a popular burlesque show with performance artist Lady Starlight. It was during this time that Gaga began to move away from the more avant garde music she was writing for herself, and toward adding elements of her favorite glam rockers, including David Bowie and Queen. The name Lady Gaga comes from the Queen song Radio Ga-Ga.

While writing at Interscope, Lady Gaga penned hits for the Pussycat Dolls, New Kids on the Block, and Akon. Writing for Akon is what finally brought Gaga her big break. While writing for him, she sang him a snippet of the song. Taken with her voice, Akon worked with Interscope boss Jimmy Iovine to sign Lady Gaga to Akon's Kon Live label, an Interscope subsidiary. 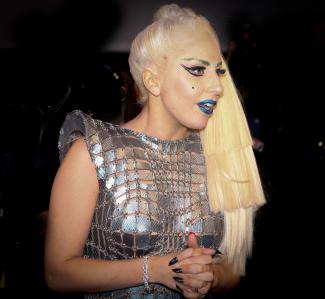 The Fame, Lady Gaga's debut album, was released in 2008 and went straight to the top of the charts in six countries. Critics were taken with the album and lauded her mix of glam rock, hip hop, synth pop and metal sounds. By 2009, The Fame had sold four million physical copies of the album and had been downloaded over 20 million times. The album spawned three hugely successful singles, Just Dance, Poker Face, and Paparazzi. Lady Gaga also began a heavy touring schedule in 2008 which continued through 2009.

Since skyrocketing to stardom, Lady Gaga has remained on top of her game, releasing two more studio albums and winning numerous awards for her accomplishments.

Lady Gaga wrote songs for The Fame Monster while on tour to promote The Fame. Released in 2009, The Fame Monster was a runaway success, and Lady Gaga became the first artist in music history to top four million digital sales for three singles. Bad Romance, the lead single for the album, was an international chart-topper while Telephone and Alejandro featured controversial music videos that became so popular with internet fans that they went viral and racked up a billion views on YouTube.

In 2011, Lady Gaga released Born This Way, which won praise from critics for its blend of musical styles, including electronica, metal, and hard-hitting dance beats. The album debuted at the top of the charts, as did its lead single, the title track, which quickly sold more than eight million copies worldwide.

Lady Gaga has won a profusion of awards for her musical achievements. She is a five-time Grammy Award winner, including Best Pop Vocal Album, Best Pop Vocal Performance, and Best Electronic/Dance Album. She also won Billboard's Rising Star Award in 2009. She has received a total of 14 Billboard Awards, including Top Dance Artist and Top Electronic/Dance Album in 2012. 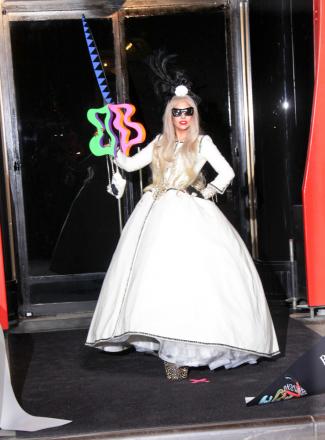 Lady Gaga has earned a reputation for her tendency to combine fashion and a flair for the flamboyant with her music. She has never turned her back on her roots in performance art. She formed the Haus of Gaga, a small group of people who work together with her to craft her outfits and stage sets for all aspects of her performances.

When she writes a song, Gaga thinks about what she will wear when she performs it and what the stage design will be. She has performed wearing a variety of outrageously creative costumes, including an outfit made of plastic bubbles, a white wolf beard, a dress made of meat, horror movie make-up, and a number of other memorable ensembles.

Lady Gaga has stirred up attention for her wild entrances at performances, most notably her arrival at the 2011 Grammy Awards inside a gigantic egg, from which she "hatched" to perform Born This Way.

Lady Gaga is as passionate about causes as she is about her music and performances. She is active on multiple fronts, donating money to disaster relief efforts such as the Haitian earthquake and Hurricane Sandy. She strongly advocates for gay rights and immigration reform.

In 2012, Gaga founded the Born This Way Foundation, which performs youth outreach and community building to stand against the problem of bullying in schools. The foundation endeavors to help young people build confidence, feel good about who they are, and make positive differences wherever they might live.

Lady Gaga revealed in a Rolling Stone interview that she is bisexual and that it has been the source of problems in all her relationships with men. She has since said that she regrets making that assertion, fearing it makes her sound like she is claiming to be bisexual in order to seem "edgy." She has been embraced as an icon by the gay community.

Lady Gaga has a huge following of devoted fans, whom she affectionately calls "Little Monsters." They, in turn, call her their "Mother Monster." A talented, driven, and compassionate entertainer, Lady Gaga will no doubt remain an influential and inspiring figure on the music scene for many years to come.