Music and fashion collide in the life of Gwen Stefani. She is one of biggest selling female artists in history and her story continues to evolve from the studio to the stage to the perfume section of department stores.

Gwen Renee Stefani was born October 3, 1969 in Fullerton, California. She showed an interest in music at an early age, and to show her parents she was serious about it she recorded her own demo for them. Realizing she was serious about her ambitions her parents enrolled her in vocal lessons, in which she practiced singing songs from the musicals she loved at that age.

Her interest in fashion was also evident in her youth and was very much influenced by her family. Her mother and the majority of the other women in her family were employed as seamstresses, and they passed their trade on to Stefani as a child. From early on, performing for her meant not only perfecting the song and coming up with a routine to go with it, but also designing and sewing her own costumes. Stefani was actually making most of her own clothes by the time she was in high school.

Her first chance to join a band came through her brother, who invited her to join a band called No Doubt. The group formed in 1986 as a ska band with Stefani sharing vocal duties with John Spence. Things looked promising for the band from the beginning, but in 1987 Spence committed suicide. The fallout from the suicide almost broke up the band, but it was Stefani who pushed the rest of the group to come back together and get back to making music. 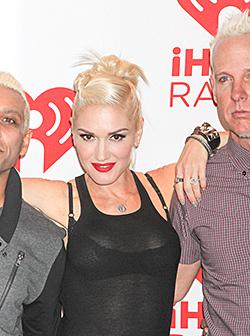 In 1991 Interscope Records signed No Doubt to a deal. Their ska-influenced West Coast sound was a huge departure from the grunge music that dominated at the time, and their self titled debut disc didn't make much of a splash on the music charts.

After Tragic Kingdom, No Doubt released two more studio albums and a singles collection but they failed to capitalize on the momentum they started with their first release. During this time Stefani also recorded successful duets with artists Moby and Eve and began to consider giving things a try as a solo artist. 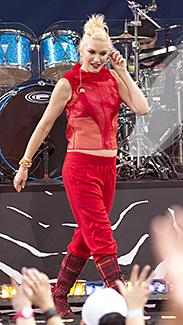 After getting the blessing from her No Doubt band mates to strike out on her own, Stefani recorded her first solo album Love.Angel.Music.Baby. (L.A.M.B.). The album was released in 2004 to rave reviews. Numerous guest artists were featured on the release, including her former boyfriend and No Doubt band member Tony Kanal, Andre 3000 of Outkast, The Neptunes, and Linda Perry. L.A.M.B. was a departure from No Doubt's signature sound which upset some listeners, but it went multi-platinum in several countries.

The follow-up solo album, The Sweet Escape, was released in 2006. The Neptunes and Tony Kanal were featured on the album again, and Keane singer Tim Rice-Oxley and Akon also appeared. The album was panned a bit by critics who considered it to be more of the same, but fans embraced it and Stefani staged a large scale global tour to support it. In 2007 she appeared as a mentor on the sixth season of American Idol and thrilled audiences with a live performance on the show that also featured Akon.

In 2010 Gwen Stefani returned to No Doubt to begin work on a new band album. While the original plan was to complete the project by the end of that year, Push and Shove wasn't released until September 2012. Lead single Settle Down was released prior to the album's release, hitting the radio airwaves on July 16, 2012. 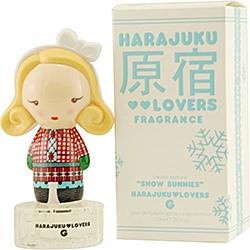 Although Gwen Stefani is best known for what she does in the studio and on the stage, she also has a very successful career outside of music.

She launched her first fashion line, L.A.M.B., in 2004. This coincided with the release of her first solo album and the clothing line takes advantage of Gwen's early experience as a seamstress and fashion designer. The L.A.M.B. line borrows inspiration from many cultures and includes eclectic combinations. Stefani launched the Harajuku Lovers line in 2005, which is less expensive and is geared more toward younger buyers. In addition the clothes, the line also includes undergarments and mobile phone charms.

Both the L.A.M.B. and Harajuku Lovers brands have also expanded into perfumes and fragrances, the latter of which uses now-iconic Harajuku Girls characters named Love, Lil Angel, Music, and Baby, as well as the character "G" based on Gwen herself. Stefani also became a spokesperson for L'Oreal Paris in 2011.

Gwen Stefani has had her share of highs and lows, but she has demonstrated her ability to be a real star throughout her career. She has been the face of No Doubt, embarked on a solo singing career, and she has a successful fashion and fragrance business. The sky is the limit for this talented artist as she continues to explore her creativity.