Eminem is one of today's most controversial music artists. The explicit lyrics to his songs shock and disgust many people, but he isn't the aggressive, homophobic thug some people assume him to be. The Guardian has praised Eminem as a brilliant poet, and he has shown a more down-to-earth character in interviews. If you look past the vulgar language of his songs, you'll see a complex, multifaceted human being.

Marshall Bruce Mathers III was born on October 17, 1972 in St. Joseph, Missouri and spent most of his childhood moving between Kansas City, Missouri and Detroit, Michigan, his current hometown. The constant moving from place to place made him unpopular in school. Marshall and his mother, Debbie, finally settled in the east side of Detroit when he was twelve years old. 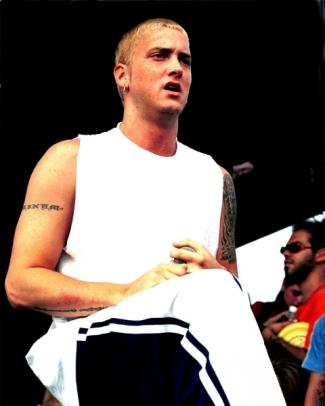 At school, Marshall was frequently bullied, as depicted in his song Brain Damage which mentions an occasion where one such bullying episode resulted in his unconsciousness. Marshall retreated into the comfort zone of his love for rap music. Influenced by rap artists such as LL Cool J, 2pac, Dr. Dre, and N. W. A, he began to develop his own style, battle-rapping with other aspiring rappers. He soon gained the reputation of a quick-thinking and sharp-witted freestyler.

The appearance of a blue-eyed white boy on the predominantly black rap scene was met by much criticism. On several occasions, Marshall was booed off stage before he could even open his mouth. His persistence paid off, though, as people began to realize he was more talented than many full-fledged rappers. He released Infinite, his first album, through a local independent record label but was devastated when it tanked, receiving comments that he sounded too much like rappers Nas and AZ.

Although Marshall usually performs under his rap name of Eminem, derived from his initials M and M, there's a darker character behind many of his songs. Slim Shady is his foul-mouthed, womanizing, mother-hating alter ego. Slim Shady blatantly rants about drug abuse, promiscuity, sexual preferences, and politics, as well as Marshall's childhood and personal life. For Marshall, Slim Shady is a means by which he can release his anger in a non-violent manner, and this alter ego turned out to be a primary mover and shaker in Marshall's spectacular success as a rapper.

The Slim Shady LP and Superstardom

Marshall continued battle-rapping at various venues, winning second place in the annual Rap Olympics and Freestyle Performer of the Year Award at the 1997 Wake Up Show. These successes encouraged Marshall to make another album, The Slim Shady LP, for which he developed his dark alter ego, Slim Shady, to let out his anger, frustration, and a decidedly warped sense of humor. The infamous Dr. Dre, president of Aftermath Entertainment, caught wind of Marshall's new album and signed him immediately. The two worked on the album, and its official release in 1999 caused a tidal wave of public attention. Marshall had finally hit the big time. 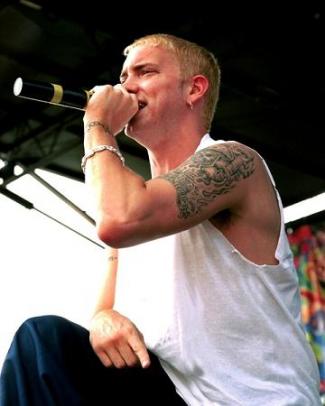 Ever since his career took off in 1999, Eminem, or Em as he's called by his fans, has remained an indomitable presence on the rap scene. With every album he has released, he's had his say on a wide variety of issues both private and public, and his personal life has remained a strong influence on his work.

Eminem released The Marshall Mathers LP in May 2000. After the success of The Slim Shady LP in 1999, Eminem could rap proudly about not being broke anymore. The album, ranked number seven by Rolling Stone on their list of the 100 best albums of the 2000s, propelled the rapper even higher into the stratosphere of both fame and notoriety.

Released in 2002, The Eminem Show kept the rapper's star high. The album, which features even more autobiographical angst than The Marshall Mathers LP, was praised by Slant Magazine for presenting a "more mature Eminem." The wide range of emotions and experience explored by the songs are all the more potent for being delivered with Em's fiercely articulate rapping prowess.

After releasing The Eminem Show, the rapper took a brief hiatus during which he starred in a semi-autobiographical film, 8 Mile. In 2004, he released Encore as a follow-up album to The Eminem Show. Like the three albums that preceded it, Encore was a spectacular success, especially commercially. Reviews were a mixed bag but tended toward the positive end.

After the release of Encore, Eminem went through five years of dark and troubled times. He took an extended break from music and became a recluse. During this time, he remarried Kim, the mother of his daughter, but the marriage lasted only eleven weeks before a second divorce. Proof, Eminem's best friend, was shot and killed outside a nightclub. As a result, Em suffered from writer's block, addiction to prescription sleep medicines, and depression before pulling himself together again, getting clean, and releasing Relapse in 2009.

Eminem originally intended his follow-up album to Relapse to be called Relapse 2, but as he worked on the music with Dr. Dre, he realized something very different was coming together, so he named the album Recovery. Indeed, it seems the album was both a recovery of his career and his spirit, and Em enjoyed more of an emotional connection with his music again. Unlike Relapse, which focuses on the darkness he endured, Recovery is about encouraging other people who are experiencing tough times to keep their heads up.

Eminem's intent for the Marshall Mathers LP 2 was to revisit the feeling of the original Marshall Mathers LP and bring to it a fresh take. On this record, Em's dexterity with rhymes takes center stage. Christopher R. Weingarten of Spin Magazine writes that this single record features more rhymes than many other rappers create in an entire career.

In addition to putting in a great deal of studio time, Eminem has stayed busy with other music-related projects throughout the years. Whether collaborating with other music artists, releasing collections of his greatest hits, or getting his music out there in other creative ways, Em's passion for rap is plain to see.

Collaborations With Other Artists

Eminem has collaborated with a number of other artists, whether those within his own scope of Aftermath and Shady Records, such as Obie Trice, or those outside his circle, such as Dido. There are a number of memorable songs Eminem has recorded with other artists.

Eminem has also made his mark as a film star. In 8 Mile, released in 2002, Em plays B-Rabbit, an aspiring young rapper from a troubled home who is determined to make it big. The soundtrack for the film included the smash hit Lose Yourself, which won an Academy Award for Best Original Song, making Em the first rapper to win an Oscar.

In addition to releasing his pent-up aggression, Eminem raps about politics, today's methods of bringing up children, problems facing the music industry, and social issues. He frequently addresses the controversies generated by his lyrics, a theme not-so-delicately reflected in his song, Just Don't Give A F***. Many people take his music at face value, failing to see the deeper messages under the surface of his blatant lyrical style. His millions of fans worldwide, however, see him as a poetic genius who expresses himself on many issues in a manner that demands attention. Eminem's numerous awards, Quadruple Platinum record sales, and constantly growing fan base prove that his words strike a chord with many.

Through his music, Eminem has bared his heart and soul with regard to his dysfunctional family of origin and the family he created as an adult. His deep, complex feelings give his fans much to consider in understanding both the man and his music.

Eminem's daughter, Hailie Jade, is undoubtedly the love of his life, as portrayed in Hailie's Song and Mockingbird, both of which appear on The Eminem Show. The subject of his daughter has often been raised in various interviews conducted by the media, and Em's heartfelt emotions are plain to see, both in his song lyrics and in the interviews. Eminem also adopted Alaina Mathers, Kim's niece, and Whitney Mathers, Kim's daughter by another man. In addition, he took care of Nate, his younger half-brother who also became a rapper.

Eminem and his wife, Kim, have had too many break-ups and make-ups to mention here, many of which have been the focal point of Slim's rants in hits as 97 Bonnie and Clyde and Kim. Despite all the turmoil, there seems to be an undeniable bond between the two of them and despite their troubles, they strive to put their mutual commitment to their daughter at the forefront.

The tumultuous relationship between Em and his mother, Debbie, has been at the forefront of his career, whether in the form of lyrical attacks against her or the $10 million lawsuit that she filed against him in response. The true nature of their relationship is largely unknown, but many of his earlier songs, like My Name Is, portray Debbie as having been irresponsible and drugged up. In the song Headlights, though, from The Marshall Mathers LP 2, he forgives her and tells her she's still beautiful to him because she's his mother.

While Eminem has a decidedly unconventional approach to his music, the messages he portrays are heartfelt. Under his tough, in-your-face surface, Em seems to be like any other regular guy, with strong morals and an undying love for his daughter. Though his life was tainted by his troubled childhood, rap became his primary means of release and expression, and the heart and soul he has put into his work over the years guarantees his lasting legacy in the music industry.