The David Bowie biography is the story of an artist who has made a career out of constantly reinventing himself and his music. Bowie's career has spanned five decades and counting in the music industry, and he managed to combine being a "musician's musician" with popular success for the duration of his musical work.

Born David Jones in Brixton, London in 1947, David Bowie's interest in music was sparked after he overheard his father listening to Little Richard. He also developed an interest in jazz at a young age, thanks to his brother's influence. He formed the band The Konrads in 1962 and joined the London music circuit, often helping out other bands with vocals. He originally wrote music influenced by American rock and roll, but eventually began to embrace the emerging British sound of the 1960s.

It was also during this time that he began to use the name David Bowie, to avoid confusion with Davey Jones from The Monkees. The name Bowie came from Jim Bowie, Alamo hero.

Decca released Bowie's first self-titled album, as well as the one-off novelty track The Laughing Gnome, in 1967, though neither did well in the charts. At the same time, Bowie became involved with Lindsay Kemp and theater, which would go on to influence his dramatic stage shows.

Bowie's first big break came in 1969 with the release of the single Space Oddity. The release was coordinated with the moon landing and the song was used to promote news coverage of the landing by the BBC. Space Oddity remains one of Bowie's best known tracks.

His follow-up to Space Oddity - the confusingly titled David Bowie - was less well received. Bowie began to experiment with metal during this time and the album was not what Space Oddity fans were expecting. Further, the fact that it was released with the same name as his first album confused the public. The album would eventually be renamed Space Oddity.

The metal direction continued through the next album, The Man Who Sold The World, while the fourth album, Hunky Dory, was pure fey pop. These albums were moderately successful, but didn't really put Bowie on the mainstream map.

Although the live Ziggy Stardust shows became famous for the theatrics and the critical and commercial success of the music, Bowie tired of being Ziggy Stardust in 1973, after the release of Aladdin Sine. Ziggy Stardust was officially retired abruptly at the end of a show in London's Hammersmith Odeon.

Ziggy Stardust and the glam rock Bowie played during that period earned him international success, but he was ready for a complete change in direction. In 1974, he released Diamond Dogs, a concept album based on George Orwell's 1984. This album was extremely experimental but also spawned the relative hit Rebel Rebel.

Next came Young Americans, a venture into blue eyed soul (or plastic soul, as Bowie called it). Ziggy Stardust fans were not pleased at all with this new sound, but many point to soul influences in the glam rock movement. Despite the uproar, Bowie continued in his soul direction with his next album and developed the persona the Thin White Duke.

During this period, Bowie's behavior become paranoid and erratic, and he became involved in a controversy when he appeared to give a Nazi salute at a show. In later years, Bowie said he was heavily using cocaine during the period and that the character of the Thin White Duke wreaked havoc with his mental state.

In the late 1970s, Bowie experimented with minimalist music with producer Brian Eno on the Berlin trilogy of albums. These albums neither pleased his record label nor the public at the time but have since been hailed as masterpieces.

Stardom in the 1980s and Beyond 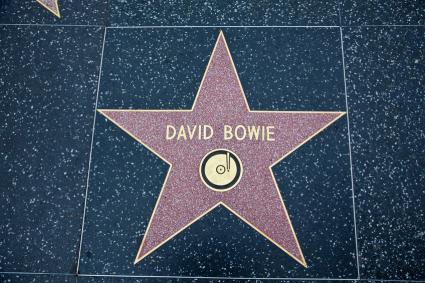 The pinnacle of Bowie's career came in the early 1980s, when he released Let's Dance. In 1983, thanks in part to heavy video rotation on the new MTV, Bowie scored three major hits and became a bona fide household name.

In the years following Let's Dance, Bowie settled into the role of an elder statesman of music. Through the 1980s and 90s, he appeared as a guest artist on a number of tracks and continued to release solo albums, though he never achieved the success of the past.

Bowie has experimented with everything from industrial to electronica to classical music. As of the late 2000s, Bowie was heavily involved in soundtracks and film scoring.

Bowie is married to model Iman and has one daughter with her. He also has one son with his first wife, Angie.